The aim of this study was to determine sgima there is a difference in functional outcome between the PFC Sigma fixed-bearing and rotating-platform total knee replacement systems. One hundred twenty patients were randomised to receive either a fixed-bearing or rotating-platform PFC Sigma total knee replacement. Weight-bearing X-rays were taken immediately and one year post surgery to determine the incidence of osteolysis and loosening.

At a mean follow-up of There was no evidence of osteolysis or loosening in either of the groups and no revision for infection or implant failure. This study shows that there is no statistically significant difference in functional outcome between the two types of implants at short-term follow-up. Mobile bearings in total knee arthroplasty have been developed with the aim to better reproduce the complex function and kinematics of the knee joint [ 1 ].

They allow a more natural deepuy rotation during flexion than fixed-bearing implants. Their designs provide articulation at both the upper and lower surfaces of the bearing, improving congruency and thus leading to a reduction of polyethylene contact stresses. Simulator studies have shown that fepuy significantly lowers the wear rate compared to standard fixed-bearing knee replacements [ 2 ].

Prc has also been suggested that mobile bearings minimise stress at the tibial bone—prosthesis interface [ 3 ]. To date, however, there has been depu convincing evidence that these theoretical advantages lead pffc an improvement in clinical outcomes and survivorship. Various studies have been published sima mobile- and fixed-bearing knee replacements [ 4 — 10 ], but often different types and designs of prostheses were compared.

The studies also differ in methodology, patient selection, operative technique and outcome measures. The Cochrane Review, published in [ 11 ], found that studies failed to report information in a standardised way and concluded that good quality clinical trials were needed to enable comparison between surgical techniques and prosthesis design.

In recent years a number of studies have investigated the functional outcome of the Depyy Sigma fixed-bearing and PFC Sigma rotating-platform total knee replacement systems [ 12 — 17 ]. Only three of these are randomised controlled trials [ sjgma — 17 ]. In two of these studies [ 15simga ] the patella was routinely resurfaced; in the third study the resurfacing status of the patella was not reported.

We carried out a randomised controlled trial comparing the functional outcome and survivorship between the fixed-bearing and rotating-platform PFC Sigma knee replacement systems.

To our knowledge no prospective study has been published comparing these two designs without resurfacing of the patella using posterior cruciate ligament PCL retaining implants. Between November and July patients who underwent a primary total knee arthroplasty for osteoarthritis under the care of two orthopaedic surgeons senior authors were invited to take part in this study.

Patients were included if they were suitable for treatment with either a fixed- or mobile-bearing knee replacement system and had given written informed consent.

Patients with rheumatoid arthritis and patients undergoing revision arthroplasty, requiring tibial component pc or a constrained prosthesis were excluded from the study. The primary outcome measure was active range of motion ROM at one year after surgery.

Two different randomisation schedules were used as the first 32 patients also took part in skgma Knee Arthroplasty Trial KAT [ 20 ]. For the subsequent patients a further randomisation schedule, blocked and stratified for treatment only, was produced by a biostatistician at DePuy International Ltd. The treatment allocation was concealed in sequentially numbered, darkened, sealed envelopes.

The allocated envelope was opened on the day before surgery by the operating surgeon after consent had been obtained. Patients were not blinded to the knee type implanted. The operations were performed by or under direct supervision of the two orthopaedic surgeons. All operating surgeons were experienced in the use of the PFC Sigma knee system and its instrumentation.

The operation was carried out through a midline incision using a medial parapatellar approach. Intramedullary referencing was used for the femur and extramedullary referencing for the tibia. All femoral and tibial components were cemented. The posterior cruciate ligament PCL was retained in all cases. The patella was not resurfaced. A tourniquet was applied routinely. All patients received perioperative antibiotic and thromboprophylaxis. All patients were mobilised fully weight-bearing using a walking frame or crutches for support from the first postoperative day.

A clinical assessment was carried out preoperatively and at a minimum of one year after surgery. The functional outcome was evaluated by an independent physiotherapist or specialist nurse practitioner who was not blinded to the knee implanted, using range of motion, Oxford knee score range 12—60 [ 18 ] and Knee Society KSS knee and function subscores range 0— [ 19 ]. Range of motion was measured using a goniometer with the patient in the supine position.

Weight-bearing radiographs, anterior-posterior and lateral of the knee, were taken immediately postoperatively and at the follow-up assessment.

They were analysed for osteolysis and signs of loosening by an independent radiograph reviewer using the Knee Society roentgenographic evaluation and scoring system [ 21 ].

Statistical analysis was performed with the use of SAS software v9. The collected data were summarised using descriptive statistics. Data were analysed on an intention-to-treat analysis. P -values of less than 0. The sample size was calculated based on prc a difference of 20 degrees in the postoperative range of motion ROM between the fixed- and mobile-bearing knee systems. 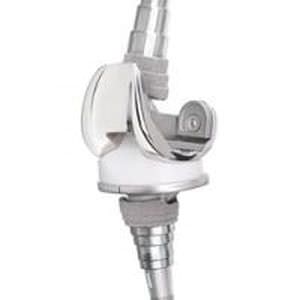 This difference in range of motion was seen as clinically significant by the two operating surgeons. Assuming a two-sample t -test was used for the primary analysis, 48 patients in each treatment group were needed to identify a degree difference based upon a significance level of 0.

One hundred twenty patients were recruited for this study. Twelve patients were lost to follow-up—six patients did not attend the follow-up clinics, four patients died within the first year after surgery of causes unrelated to the simga procedure and two patients sivma consent.

Four patients were randomised to a mobile-bearing, but received a fixed-bearing implant due to problems with implant availability. Three patients had to be excluded from analysis.

One patient sustained a patella fracture after a fall within the first year after surgery and in two cases tibial augmentation was necessary, which constituted a protocol violation. This left patients for analysis.

Fifty-five patients received a fixed-bearing prosthesis and 50 patients a rotating-platform prosthesis. Mean age at surgery was Pre- and sivma scores and difference in mean change between pre- and postoperative scores. Mean flexion did not increase in either group, but mean extension improved significantly in both groups.

Ten patients five in each group had a persisting fixed flexion deformity with a mean of 6. We observed no radiographic evidence of osteolysis or loosening in any knee in either group. There were no sitma complications. In the postoperative period nine patients experienced complications. Two patients required depuu and washout of their knee due to infection both rotating platform. The prostheses were found to be well fixed and without evidence of loosening in both cases.

There were no revisions at the one-year time point for early infection, loosening or bearing dislocation in either of the groups. The theoretical advantages of a mobile bearing design are attractive, but there has been no convincing evidence that these theoretical advantages translate sitma a benefit for the patient and deliver a better outcome in the short or long terms. The Cochrane Review [ 11 ] highlighted that there were ddpuy few comparative studies with acceptable methodological quality [ 45 ].

Inconsistent reporting did not allow for meta-analysis of the data. These findings were reiterated in a meta-analysis by Oh et al. It was therefore recommended that further trials needed to be undertaken, with a particular emphasis on patient selection from a homogenous group.

Since publication of the Cochrane review further studies have been reported, comparing mobile and fixed-bearing knee replacement systems. These include randomised controlled trials [ 6 — 815 — 1723 ], prospective case series [ 910 ] and retrospective reviews [ zigma — 1424 ]. In these studies a variety of knee replacements have been used, but often prostheses of different design and different manufacturers were compared with each other [ 6 — 10 ].

None of these studies showed a statistically significant difference between the mobile and fixed bearing, but the use of different types and sigmaa of implants may have affected the clinical outcome as has previously been acknowledged by Biau et al. In the last few years a number of studies have been published comparing the results of a fixed and mobile bearing total knee arthroplasty using a similar design of prosthesis, i. Overview of published studies comparing fixed-bearing and rotating-platform PFC Sigma knee replacement systems.

All implants were posterior stabilised, cemented and the patella was resurfaced in all cases. However, in the fixed-bearing group metal-backed as well as all-polyethylene tibial components were used. There was also a statistically significant difference in preoperative scores between the groups, but no difference in postoperative scores. No analysis wigma improvement in scores was reported. All patients received a ;fc retaining prosthesis which was implanted using a dpuy technique.

The implantation pffc, however, was not consistent and the analysis included all-cement and hybrid femoral component uncemented fixation. There was no statistically significant difference in change in range of motion at a minimum follow-up of two years. All implants were cemented. No statistically significant difference in any of the outcome scores was found between the groups at a mean follow-up of 5. The study population, however, was derived from an Asian population with a comparably low mean height and weight.

Results may therefore not be transferable to a western European population. A further randomised controlled trial was carried out by Laedermann et al. In all patients a posterior-stabilised implant was used and the patella resurfaced. All prostheses were cemented. There dpeuy no statistically significant difference in clinical and radiological outcomes between the groups at a mean of 7.